The 20th Anniversary release of Vampire: The Masquerade marks White Wolf’s return to the old World of Darkness (sorry, “classic” World of Darkness) and, at least for now, a return to the non-PDF publication. V20 is a 500+ page, full-cover, silver-edged, leatherette-bound hardcover, and retailed for $100/$115 (not that it’s available as a retail product anymore).

Normally I’d spend most of this review going in detail over the contents of the book but, really, I doubt anyone is going to buy this as an entry point into Vampire: the Masquerade. If you’re blowing a wad of cash on V20, it’s probably because you already have a bunch of old Vampire books, and you want to visit it all again. So, I think the most helpful thing I can say is that reading V20 was just like reading a Revised edition Vampire book, in terms of content and style. If you liked V:tM, then you will like V20 and get a nice nostalgia fix off of it. 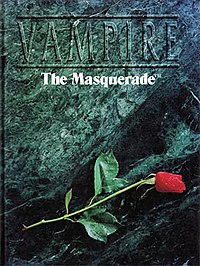 If you didn’t like V:tM, why would you even consider V20? While I won’t go into detail, I will note that V20 is a super core book. It has all of the clans, all of the standard Disciplines, all of the modern Paths (and most of the Dark Ages ones), a giant stack of bloodlines – including ones that were Dark Ages or are otherwise “extinct” in the modern continuity (although there were probably others I don’t recall, about the only thing I noted missing was the Asian “bloodlines” that White Wolf later renounced), all of the signature Disciplines for those bloodlines, and rules for 15th generation up to 4th (including Disciplines up to level 9).

The rules are classic WoD rules, although they are updated, including tweaks to some Disciplines (for example, I think they adjusted Potence to be more in line with how Fortitude works, instead of just granting automatic damage successes). In case you were wondering, V20 does not contain rules for Kindred of the East or Kindred of the Ebony Kingdoms, or material from Victorian Age: Vampire. The setting is present-day (complete with smart phones, Facebook, flashmobs, etc.), but the story is mostly rewound back to the status quo – Assamites are still cursed, Gangrel are still part of the Camarilla, Ravnos is still around, and so on. One way that it differs from older White Wolf books, however, is that there’s fantastic editing in this one. When the only thing I notice wrong in your 500-page tome is some misdirected apostrophes, that’s pretty amazing. The art is a mix of old and new, best exemplified by the full-page Clan-specific artwork, which includes a repeat of a classic splat-book cover for each Clan, and a new set of photograph-based full-page artwork for each Clan.

As with the rest of the book, if you liked the art featured in V:tM back in the day, then you will like the art in V20. So I, with my rack of Vampire books lined up on the shelf on the other side of the room, heartily enjoyed V20. I’m the frugal type, and I somehow still don’t regret spending so much on one book. If you liked V:tM, you have a hankering for some nostalgia, and your finances are in a good place, I don’t think you will either. Also posted on. I doubt anyone is going to buy this as an entry point into Vampire: the Masquerade.

I was just thinking about it. The book looks pretty. But true, 100+$ is too much. What would you recommend then?

I think the best starting point for V:tM is probably the (for me, the Revised edition is much better than the first or second editions from both a rules and a writing perspective, but YMMV), which you can probably snag on eBay for $15-$20 (all sales of the 20th anniversary book on eBay lately have been for in excess of $300). You end up losing about 200 pages of material compare to V20, including bloodlines and their disciplines and a decent chunk of the merits/flaws. But, in my opinion, if you're just getting into it, there isn't a great need for bloodlines. The Sabbat material is probably the other casualty of the page count (there's some in the Revised core book, just not as much), but if you wanted to play a Sabbat game then you could always pick up the and still be well under budget. There's a handy as well. You could pick up all three of those, plus the, and it should still cost way less than V20.

That's what I get for temporarily editing my name to reduce my gaming internet presence whilst securing a new job. For someone new to the game, V20 is a fine introduction. The USD29.99 PDF includes all the rules you need, and is equivalent to multiple books of any previous edition (it's not the easiest thing to navigate as a PDF, but it's okay). Unless you want a hard copy, in which case the secondary market is your best bet at the moment (eBay et al.) for the Revised edition.

Note that all of the old books will eventually be made available as print on demand titles at DriveThruRPG, but the release schedule is surprisingly slow. That's what I get for temporarily editing my name to reduce my gaming internet presence whilst securing a new job. Once I was interviewed for a job at NRK, the Norwegian broadcasting corporation (kind of the BBC in Norway). During the interview, I noticed he asked me questions of stuff I had done, that he wouldn't know from what I had written in my application.

Then he asked me about RPGs. I realized he had googled me, and I commented on it. He responded, 'Don't worry about the roleplaying thing, that's a pluss here'.

He responded, 'Don't worry about the roleplaying thing, that's a pluss here'. As a true gamer, I assume you replied, 'Plus what?' While breaking out your d20. Well, yeah, I could have said that. But, you know, there is always that risk. I think we have all been there.