A new program file with the name Knights and Merchants is created as standard, if you want to use another name for the file change the standard setting in the.

Contents. Gameplay Knights and Merchants: The Shattered Kingdom has a single-player campaign that consists of 20 scenarios with scenario length ranging from around 5 minutes up to 7 hours or more depending on difficulty. The game offers a multiplayer mode by using either, or where up to 6 players can play.

There are 10 different scenarios to choose from including a number which focus specifically on the combat element of the game. Plot Knights and Merchants recreates the era of the. Apart from the purely fictitious of our world, all game elements and scenes are based on the, but more particularly, the, around 1200 A.D. Economy The economy is very complex in Knights and Merchants: The Shattered Kingdom, more so than most other RTS games, with a greater range of resources and a need to combine basic resources in a number of ways to create a functioning economy. For example, in order to get loaves of bread, the player is required to first build a farm to get wheat, then a mill to get flour and also a bakery to bake loaves of the flour. The many different resources in the game require a large amount of corresponding buildings and units in order to fully utilize them requiring greater than usual for an RTS.

Every citizen and soldier must eat in the game meaning that the player needs to produce a great deal of food creating a more naturalistic limit on army size. There is no population limit in game, instead population is limited by how much food is produced. If a unit is not fed for a sustained amount of time it will die. The everyday life aspect of this game is considered a notable feature.

Many different structures can be placed, forcing the player to consider where and when to place each structure, this is also dependent on terrain and territory. However, for new players this greater complexity can lead to a process of trial and error but once experience has been gained it becomes an interesting take on RTS economics. Expansion pack Knights and Merchants: The Peasants Rebellion is a standalone. It includes the 20 original missions (although the Russian release doesn't include the original campaign) as well as a brand new campaign that consists of 14 missions, a scenario mode with 10 different scenarios, and new buildings and units.

The game has not been released in the UK. Gameplay The game's tech tree is simple and straightforward, and most new technology is accessed upon new building completion. To begin, the player can only build a school house that trains basic workers, but as the game advances more buildings and units become available. When playing a scenario or multiplayer mode, the player's technological advancement is not restricted, however in the single-player campaign some buildings cannot be built until the player progresses to later missions.

The AI always begins with a technological advantage against the player, allowing them to develop at a higher level. The economy in The Peasants Rebellion is complex, stemming from the game's variety of resources, ranging from wood and stone, to sausages and wine. Many resources need to be transported to other buildings to be refined, and then delivered - which presents the challenge of building placement and interconnecting (every building has to be connected by roads) as the player develops. The citizens in The Peasants Rebellion get hungry - from workers, to farmers, to soldiers. This creates a challenging dynamic for the player - between managing combat, resource gathering, city building, as well as making sure there is a stable food supply for all the units. Unlike many other RTS games, Knights and Merchants: The Peasants Rebellion has no unit cap - aside from limited map size and hunger features, which help to limit the player's sustainable unit numbers. Multiplayer mode in the original game was completely broken with the game going badly out of sync, and only fixed in the fan remake. 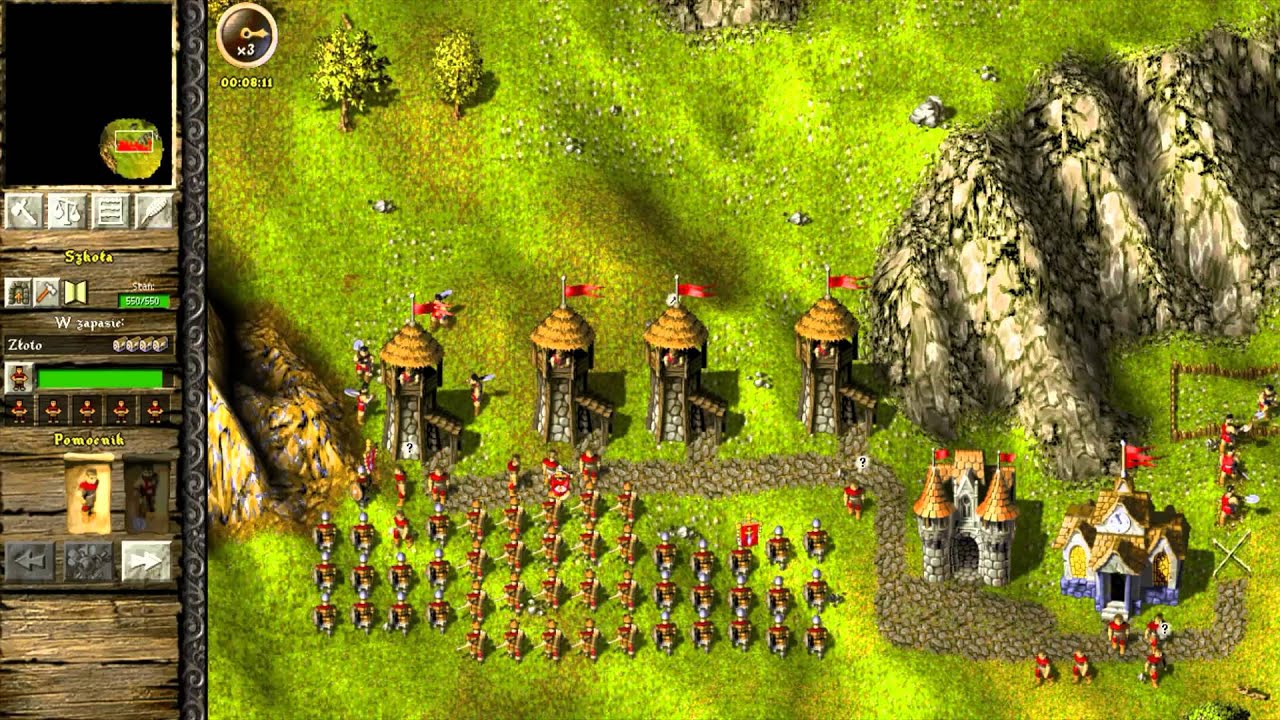 KNIGHTS and MERCHANTS recreates the era of the Middle Ages. Apart from the purely fictitious geography of our world, all game elements and scenes are based on the Anglo-Saxon period, 1200 A.D. And we haven't used imaginary elements like fabled creatures, either. The player takes on the role of an ordinary captain in the Palace Guard. A conspiracy against the king catapults the captain into a situation where he finds himself responsible for the defense of the last royal province.

This is all that remains of the shattered kingdom, which has been split into numerous small principalities and fiefdoms. And now even the king himself, ensconced in his capital, is threatened by enemy armies.

This is the starting point of your Middle Ages adventure. Now you must win back all those provinces which once belonged to your king.

THE SHATTERED KINGDOM: After many battles, a former kingdom has been divided into many small principalities and earldoms. The king's troops were pushed back into one last royal province, and the rulers of the other provinces waged terrible, destructive wars against one another. The whole land fell into a state of chaos and now the former royal capital itself is under siege by the armies of the rebel lords.

You belong to the last remaining group of loyal king's men, and have been commanded to go to the king in view of the imminent attack. THE PEASANTS REBELLION: Build a prosperous settlement with a complete economy. Arm your troops and meet the enemy on the battle field!