systemsnowbot.netlify.com › Iggy Pop And The Stooges Ready To Die Rar ► ►

Knows that the new album, Ready to Die, is unlikely to compete with Justin TimberlakeandTaylor Swift at the handful of record stores that still exist. 'I didn't do this expecting to make money out of it,' he tells Rolling Stone. 'It's a lot of work, but I felt it was something that had to be done. This is my teenage dream, having a band that makes records and plays gigs.

That's still the glory of it, and I wanted to honor the institution and honor the group.' His teenage dream turned into a bit of a nightmare not long after guitarist James Williamson joined the band in 1970.

(Williamson's work on Ready to Die marks his first collaboration with Iggy in over 30 years.) Iggy and Williamson wrote the eight songs on together, but the album tanked, heroin abuse consumed the band, and when they played their final show at Detroit's Michigan Palace in 1974, they were literally dodging beer bottles all night. Game of thrones book series. 'Looking back, it's probably better that we didn't have any success,' Willamson says. 'If we made any money, we would have killed ourselves because we were taking so many drugs.' After the Stooges split in 1974, Iggy went to a mental hospital and Williamson went to California State Polytechnic University, eventually landing a job as Vice President of Technology Standards for Sony. He put on a suit and went to work every day, not so much as touching a guitar for nearly 30 years.

The Stooges became a distant memory from a brief period in his youth. 'Iggy and I ended on really bad terms,' he says. 'The only time we even spoke after the split was during a few business calls about publishing.' The Stooges reformed in 2003, but it was the original lineup with Ron Asheton on guitar. He died of a heart attack in 2009, leaving the group in need of another original Stooge. Iggy phoned up his old friend Williamson and invited him back into the band, confident he'd be able to regain his old chops.

'Everyone else in the band was worried about that,' he says. 'I was sure from the get-go. I believe in fairy tales, so I expected it to happen within a week.

It actually took him 18 months to get back to speed. He doesn't play the exact same way he did in his 20s, and I don't quite sing the same way. But he uses his head more.' Williamson took an early retirement from Sony to spend the last three years playing the Raw Power classics at festivals around the world with the Stooges, and in 2011, they began the very gradual process of writing their first songs together since the mid-Seventies. 'We write together very quickly,' says Williamson.

'We worked a bit at his house in Miami, and then when we were on the road, we'd sit down in a hotel room and write some more.' According to Iggy, their writing style has evolved a bit over the years. 'When we did Raw Power he always had the key riff, the incendiary riff or malevolent riff, depending on what gear he was in,' he says. 'On most songs, I would ask him verbally, 'Would you come up with another part?' I would describe what part. On this new album, he mostly sent me a pre-organized track. He always had a particular structure he wanted and I worked around that, almost without exception.'

The result is Ready to Die, a collection of 10 riff-driven songs that's a mere 34 minutes long, the exact same running time as Raw Power. It hits stores on April 30th. 'I think most albums are too long these days,' says Iggy. 'I was aware of the other use of the title Ready to Die by Biggie Smalls, but it's such a distant culture to ours that I just didn't care.'

The title track was inspired by an incident at a Georgia Waffle House. 'There were three old dudes there, about the age of the Stooges,' says Iggy.

'There were all pensioners with John Deere caps and flannel shits and everything. They would sit around the Waffle House down there plotting to blow up government offices. The waitress who brought them their pancakes overheard it and called the Feds.

I though it was so poignant, but also funny. They wanted some meaning in their life. I started writing, and even had a line about 'get off my lawn!' But it didn't hold water when I went to record it because it was too much of a cheap shot at these people. We kept the chorus that goes 'I'm shooting for the sky because I'm ready to die.' It's basically about how depressed and lonesome you get dealing with modern life.' Ready to Die ends with 'The Departed.'

It's the first song that Williamson and Iggy wrote for the disc, and they premiered an early version of the track at a 2011 tribute show to Ron Asheton. 'I wasn't satisfied with the quality or universality of the thing,' says Iggy. 'Now it's more like our version of 's 'My Back Pages.' ' Mike Watt plays bass on the disc and original Stooge Scott Asheton is on drums, though health problems have largely kept him off the road in recent years. 'This is very tough travel,' says Iggy. 'I don't think it's time for Scott to be out touring now. Basically, he's still the drummer, but Larry Mullins is filling in on most of the touring stuff.'

Asheton did return to the Stooges after a long break to perform at Austin City Limits last October. 'He gave it a shot there,' says Williamson. 'It worked out pretty good, but then he thought, 'Well, I better not go on the road now.' It's just really tough to play live gigs, especially as a drummer. But the studio is different. He sounds great on the album. I really hope he's able to return to the road at some point.

He's getting his strength back.' The group plays about 20 shows a year, though they are largely in Europe and Australia. 'There are so many different rationales and reasons why that's the case,' says Williamson.

'But I don't personally subscribe to them. I think that, unfortunately, we have a very aggressive agent in Europe who just snatches up those dates as fast as we open the calendar every year. Promoters in America are a little more conservative.' Iggy offers a more concise explanation. 'It's pricing,' he says. 'It's just whoever has the money to pay us.' American dates are booked at the Ink-N-Iron Festival in Long Beach, California on June 8th and the Free Pass Summer Festival in Houston on June 1st, but the rest of the summer is devoted to shows in Europe.

'We promised the label that we'd do something in New York and something in Chicago in the fall,' says Iggy. 'I'd rather wait until then so people who like our music have a chance to live with some of the new songs.' Plans beyond this year are vague, especially since Iggy is five years away from his 70th birthday. 'I don't want to tour this group into the ground,' he says. 'I am curious to see what this album does since it's definitely not commercial shit. People know our old songs through film, TV, the Internet and advertising. We didn't get there the old way, but we got there. 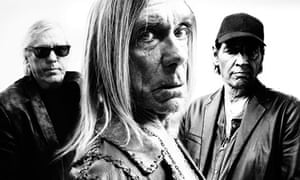 Not in a huge way. It's not exactly like we released 'Thong Song' or anything.'